Listen to Babytree on Bandcamp
https://the-slags.bandcamp.com/album/babytree 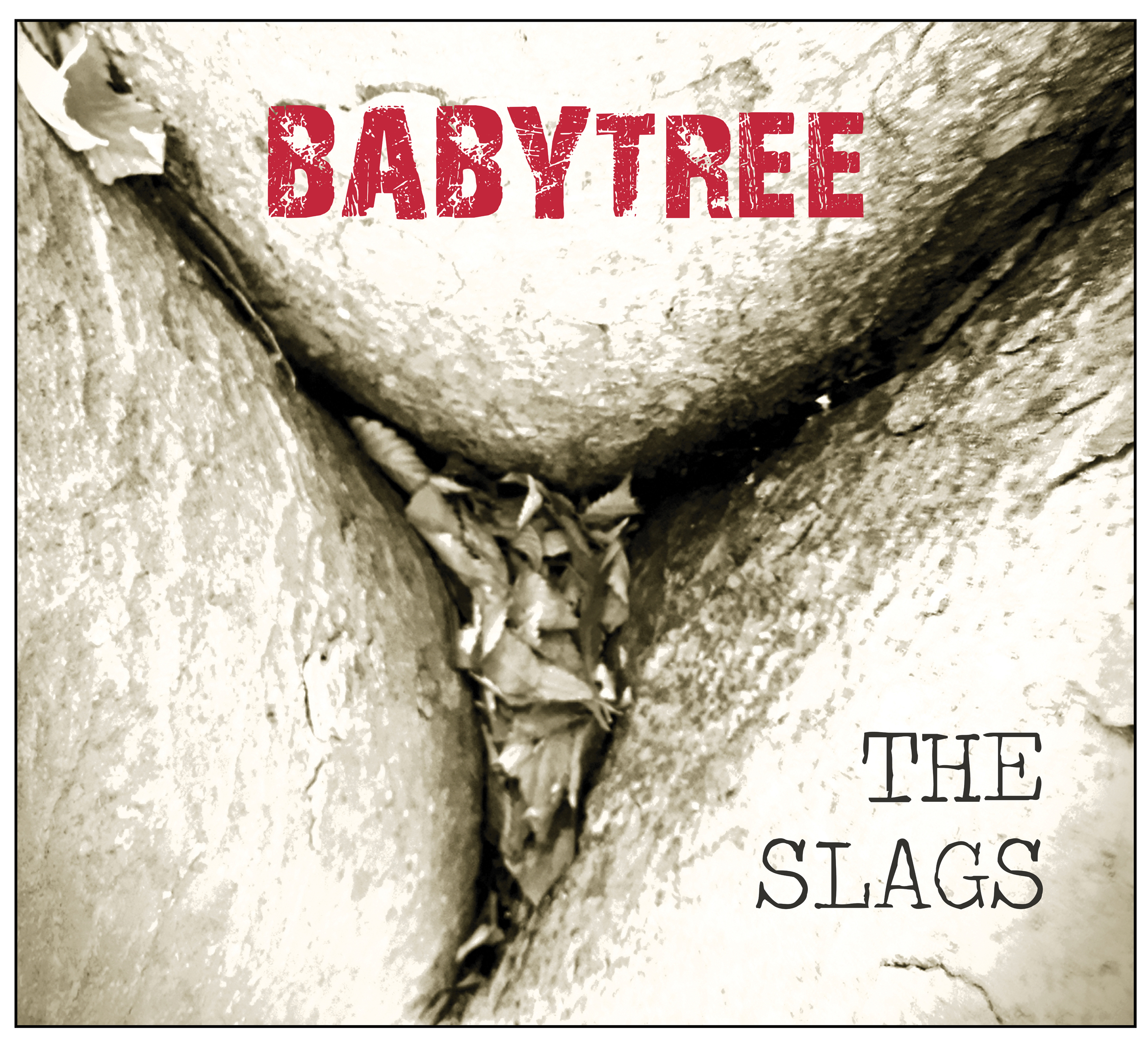 THE SLAGS have left their loudest days behind. After all, they have been unplugged for a few years. But they think that’s a good thing. And what does that mean? The three Frankfurt musicians radiate musical energy one way or another – with or without an amplifier. You can hear that in the songs of their new album BABYTREE. It is now their seventh studio work, a journey through the entire spectrum of the SLAGS universe. Poppy, punky, but also epic-loopy, bluesy, in a La-La-Land-style or deep inside – it shows all planets of the band’s own solar system. An acoustic journey of discovery, exciting to puzzle over who is actually doing what.

Actually, the ladies wanted to celebrate their 30th anniversary in 2020 – with film documentary, the new album, live concerts, festivals. Then, the virus intervened. So everything was quickly postponed to 2021 – new year, new game!

THW SLAGS have used the past twelve months to work on their rock’n’roll doc. Above all, this meant understanding memories, coping with them or rediscovering them in the first place. They viewed old videos, worked up basements full of material, got quotes from various companions, and developed storyboards. Lots to do under the radar. Lockdown time was used to compose, write and even play live in their own garden from time to time. In the end, eleven new songs were ready to be recorded and produced at the end of 2020 – again in collaboration with Oliver Rüger at the Bieber recording studio.

After three decades, THE SLAGS still consist of independent, expressive and strong characters, that work wonderfully even solo – each for herself. But they are always the strongest, when they join forces. For BABYTREE, the name of the game is diversity, versatility, and distinctness. Each of the three artists writes, composes and sings.

After thirty years, THE SLAGS have established themselves on the musical landscape – both as a band, and as individuals. With that confirmed, BABYTREE is their most mature and bold album to-date.

New Album Out Now- The Slags – The Bedroom Tapes

CD Info
„The Bedroom Tapes“ tells the story of today and yesterday. From love, desires, and burdens, and from all of the things that makes life moving and exciting, from which The Slags truly can sing a song about.
In the 90’s, The Slags, still with four members, were the one and only best hard-rock female band in Germany, until their careers where interrupted with children, family, cleaning, and solo projects among other things.
After their reunion from 2005-2007, in which the album „Run Free“ (Blue Noise, Guido Lukas) was released, the bands activities were once again put on ice, after the bassist, Anja, suffering from Rheumatoid Lung Disease, died in 2014.
The idea with unplugged, began in 2013, after the band decided because of health reasons, instead of rehearsing in dark, fungus-filled rooms, it would be better to rehearse at home, in the daylight, unplugged, and with less equipment. The new songs arose from the years of several different bedrooms and living rooms, which completely functioned as rehearsal rooms, and what was heard in the last few years live on countless large and small stages, inside as well as outside, and is now available on a brand new CD, the title, understandably „The Bedroom Tapes“!
Produced by Oliver Rüger, in the Offenbach recording studio Bieber, and was supported by bassist Daniel Schröter. „The Bedroom Tapes“ arose as a collection of biographical songs with diverse colors, with reduced but absolutely specialized instruments; Guitarist Conni plays a Archtop guitar from Artur Lang. Drummer Suse is content with a snare and drum-brush. Bassist Daniel, although it is not a contra bass, makes it sound as if it was one. Singer Bine, handles tambourine, harmonica, and even an accordion. And the polyphonic voices of these musicians simultaneously touches and carries one away, and desiring more. The Slags, with their „Bedroom Tapes“, opens the doors to many different musical areas.
Sometimes one might cast a timid glance into the intimacy and seclusion of the bedroom. Sometimes one sits with friends cheerfully around the kitchen table, or even a comfortable, warmly decorated living room, the perfect place for thoughts and inspiration. One should also be able to blow steam off either right where he’s standing, or at a psychedelic hippie fest, or perhaps at the corner pub, where one could hear compelling, or blues music, and talk sense or nonsense with the bartender about life or other rants. Not quite as loud as it used to be, but still and maybe more than ever, vivid, passionate, and exciting. 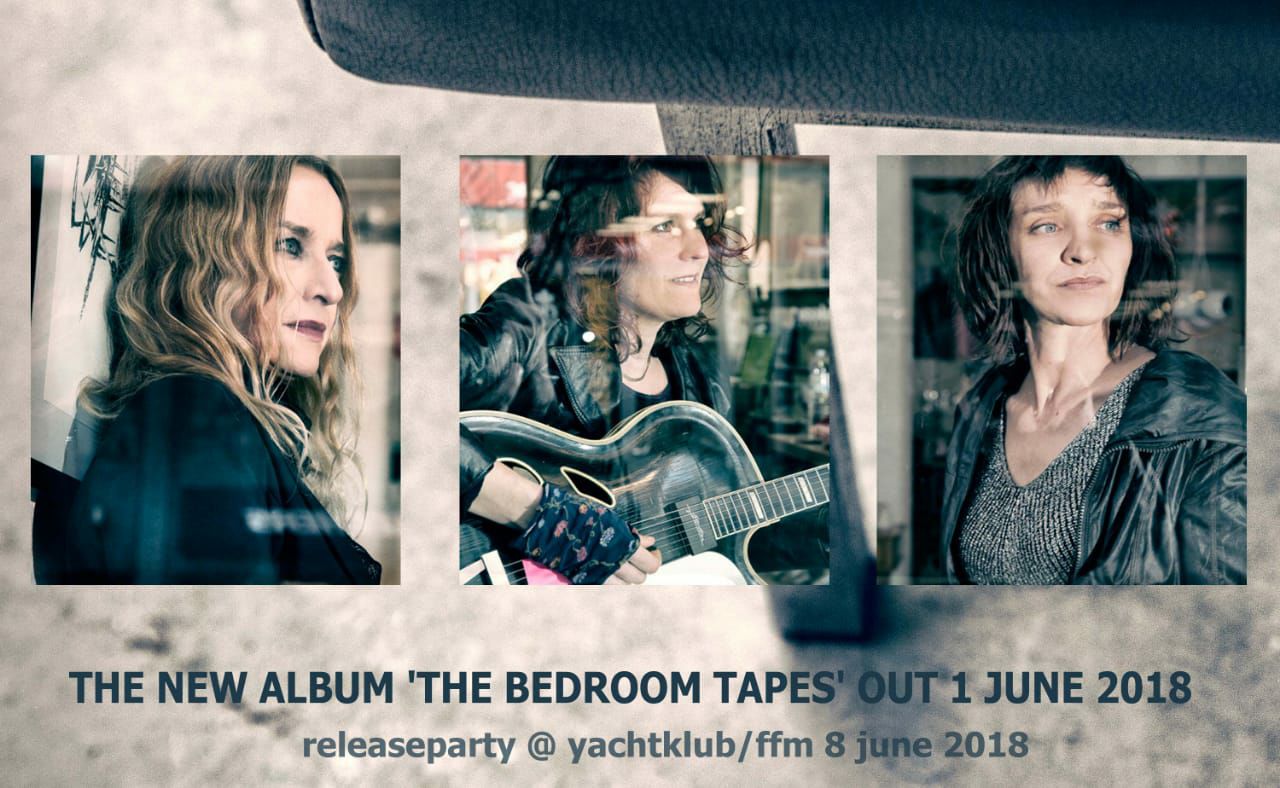 When The Slags released their album „So What“ in 1992, the German major labels were being infiltrated by black-clad men trying to implement their subversive indie ideas in the industry. The spirit of the punks revived. In the midst of all that were four women from Frankfurt who have been praised in many reviews as the only and best hard-rocking female band in Germany.
„They refused being labeled, neither as part of a youth movement nor Riot Grrls à la L7 or Babes in Toyland, although similarities in style and content are clearly recognizable“ (review about the band)
They did thirteen (!) Tours through Germany, Switzerland, France and the Czech Republic. In 1996  they went to take some time off, „raising children, family, cleaning and solo projects and what else mattered“, they said as clear as cryptic at the same time.
In 2006, Guido Lucas (Blackmail, Scumbucket, Donots) produced the comeback album „Run Free“ on blunoise label. But the renewed zest for action of the Slags was thwarted by the serious illness of their bass player Anja Kraft, who finally had to undergo a lung surgery. To celebrate the first birthday after the successful transplantation on
January 10, 2014 singer Bine Morgenstern, guitarist Conni Maly and drummer Suse Michel played Anja an acoustic serenade. This was the birthday hour of Slags unplugged. „The hustle of dragging amplifiers and speakers, practicing in dark rehearsal rooms, was not only too much for Anja”. In the newly acoustic setting, the Slags steped inside the basics of their self-written songs and reduced them to the essentials. “This new concept was all great,“ they remember their second, quieter „Big Bang“.
In July 2014, the legendary appearance at “ the wagon” by the banks of the river main in Offenbach had to be placed outside on a ramp, because of the crowd of visitors. The unanimous opinion of the enthusiastic fans: even without electricity they had enough power to remember the old, noisy days. Unfortunately it would be the last concert with Anja. She died on the 1st of October.
In a relaxed atmosphere, with small luggage, the Slags now travel as a trio and play their great songs stripped to the bone, and as a reminiscence and memory of the unforgotten bandmate. „Anyone who liked the Slags at the time, will not be disappointed today. And by the way, there are always remarkable, funny or sad stories to tell from the past. Good amusement, assured!” the the three do promise. 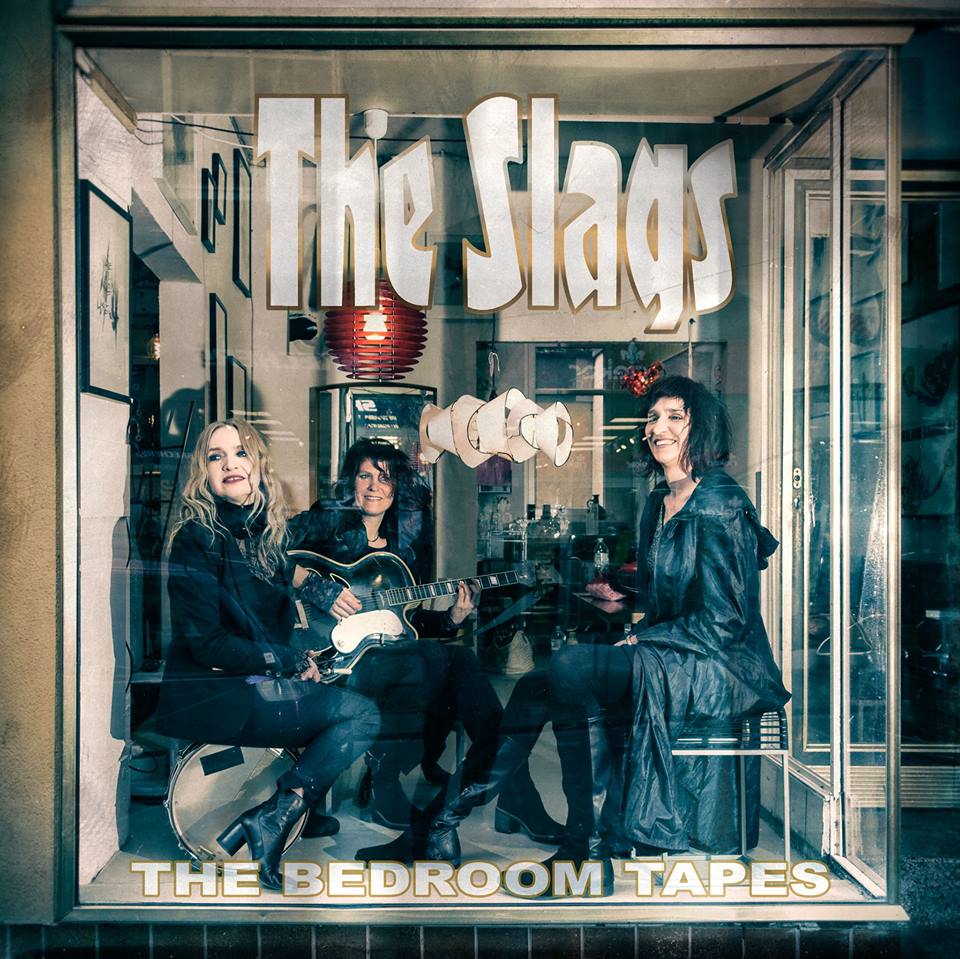 There was not a lot happening with the Slag lately. As far as I know, Run Free from 2006 was their last album, and they rocked really wild on that one. Some of the musicians became mothers, and bass player Anja Kraft tragically died of cancer in 2014, so that it’s understandable that the band went on hiatus. Although the remaining band members were all active in projects, they never truly broke apart. Out of respect of their late bass player, they decided to remain a three-piece. The bass parts on the new album have been recorded by Daniel Schröter who is not an official band member.

Drummer Suse Michel, guitarist Conni Maly and vocalist Bine Morgenstern started a successful crowdfunding campaign to finance The Bedroom Tapes. The first thing you will notice is that the ladies have become quiet over the years. The Bedroom Tapes – and yes, the songs have all been written in bedrooms – contains four old and six new songs, all performed acoustically. The transformation from an all-female rock group to an unplugged band makes for mellower music. There are some blues elements (Can’t Stay, Perfume Of The Rose), and also melancholic moments (Take Some Time, Dancing). The multi-layered vocals give the songs a somewhat sad touch. Apart from the classic (unplugged) rock instruments, we get more unusual sounds from a harp and an accordion. The album has been recorded in just four days, and contains very intimate lyrics, dealing with problematic situations one encounters in life, and often there are solutions to be found.

I have to admit that I prefer Run Free to The Bedroom Tapes, but I do have enormous respect of how the band continued through the tragic loss of Anja, which is what she would have wanted. The Slags compare themselves to the Bandits from the eponymous film, and I am certain that there is not a more accurate comparison to be found.